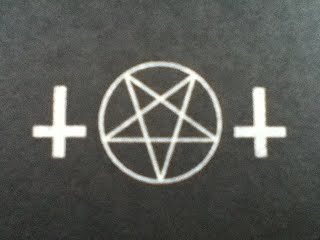 But we understand the confusion this may cause, and so we always try to include the phrase "Hail SATAN!" on any material using a pentacle, or else surround it by inverted crosses, just to make our intentions clear.
Posted by Satanic Missionary Society at 6:03 PM 1 comment: 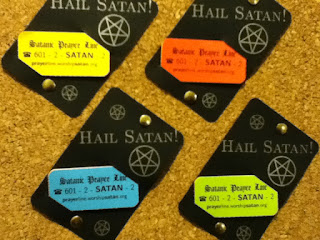 Posted by Satanic Missionary Society at 12:50 AM No comments:

This just in: have you heard about Jesus? So have we.

Someone called the hotline wanting to tell us about jesus. We are already quite familiar with jesus, and have rejected the ideal of self-sacrifice he represents. But just in case you haven't heard, you can call these people and be "saved"

Just in case the number in the message doesn't work, the number they called from is 330-536-3802
Posted by Satanic Missionary Society at 6:41 PM No comments: 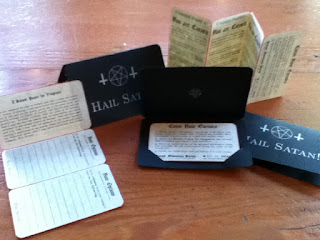 Do you have enemies? Wouldn't revenge be sweet? What could be sweeter than letting them know they've been cursed?

Now you can easily notify your enemies that you have placed a curse on them and decide whether to let them make reparations, change their ways, or simply remain eternally cursed.

This enemy-cursing kit can be yours absolutely free. Just send a self-addressed stamped envelope to:

For a limited time only:

Act now and get FOUR curse notification cards instead of three! (For a limited time only while supplies last)

Posted by Satanic Missionary Society at 6:23 PM No comments:

Posted by Satanic Missionary Society at 5:13 PM No comments:

Make your own Satanic cards and flyers. Follow us on Tumblr

Not finding our cards and flyers anywhere? Think you could do better than our choices of paper and presentation? Check out our new tumblr blog for 600dpi artwork you can use to make your own Satanic propaganda:

Do whatever you want with this art, as long as it's diabolical. 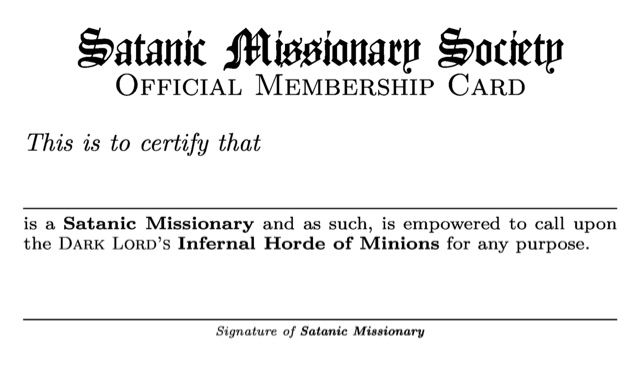 Posted by Satanic Missionary Society at 2:38 PM No comments: http://www.flickr.com/photos/thoughtsofclouds/7048650673/
Posted by Satanic Missionary Society at 11:59 PM No comments: 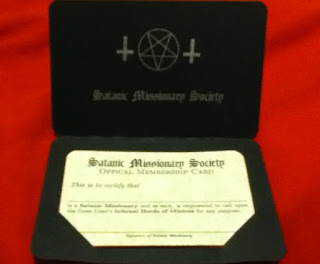 Other Satanic organizations will charge you up to $200 for a membership. They will also ask you for personal details to judge whether or not you meet their standards.

We are different. We believe that anyone who wants can proudly call herself or himself a Satanist. All we seek in our members is a desire to share the Dark Gospel. A SATANIC MISSIONARY SOCIETY MEMBERSHIP IS ABSOLUTELY FREE AND UNCONDITIONAL!

If you believe you have what it takes to join in our Unholy Mayhem, then just send us a Self Addressed Stamped Envelope, and we will send you this hand-crafted, attractive set of not just one, but FOUR official membership cards, so you can continue to share this profane vocation with friends and family.

We don't even collect any personal details. Satan is in your heart, and knows whether you are a Satanic Missionary or not. Once we have sent you your membership cards in the self-addressed envelope you supplied us, we have no record of your existence. Only Satan knows what diabolical purpose you have in mind for your membership in our Society.

To receive your membership cards, send a Self Addressed Stamped Envelope to


We currently CANNOT accept monetary donations of any kind, and can only accept envelopes stamped with US Postage ($0.45 US, $0.85 Canada and Mexico, $1.05 everywhere else) or unstamped envelopes accompanied by an International Reply Coupon. We are also unable to accept requests for membership cards over the phone or by e-mail as we need a self-addressed stamped envelope to use for delivery to you.


Important update for people outside the United States:
Since you cannot easily obtain US Postage to send us, we can also accept International Reply Coupons, which you can get from the post office in your country. Unfortunately, many countries have stopped selling these (notably the UK and India). If you are unable to obtain an International Reply Coupon to send us, don't worry, we're still committed to enrolling you in our Unholy Society. Please just send us anything interesting and wicked from your country that is small enough to fit in an envelope and we will accept this in lieu of return postage. (We still need a self-addressed envelope from you)
Here is more information about International Reply Coupons:
http://www.upu.int/en/activities/international-reply-coupons/about-irc.html
And here is a list of countries that sell them:
http://www.upu.int/en/activities/international-reply-coupons/countries-selling-ircs.html
Posted by Satanic Missionary Society at 1:10 AM 11 comments:

Satanic Prayer Line: Put a hex on somebody?

http://prayerline.worshipsatan.org/2012/05/put-hex-on-somebody.html
Posted by Satanic Missionary Society at 4:01 AM No comments: 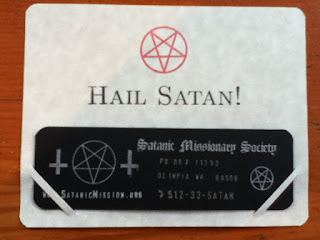 This just in from our minions:

"We are legion. We have a new satanic flyer design to share. We won't make as many of these as the others because this is a very labor-intensive process. But we will strategically place these where they will be appreciated. We labor for the glory of the Dark Lord! Hail Satan!"

So keep an eye out. Maybe you'll find them before the self-righteous holy ones destroy them.
Posted by Satanic Missionary Society at 6:41 PM No comments: