Suggestions for a caller asking about sacrifices

We just got this call, and have a few suggestions:

We think this call may be from "jenny" rather than "nicholas" as the number the caller gave is a well-known number for someone named "jenny". The caller, however, neglected to hide his caller-id, which differs from the one left in the message. Instead of calling back, we'll post our suggestions here in the hopes they may be helpful to others with similar questions.

We're not aware of any Satanic groups that practice animal sacrifices. The Satanic Missionary Society certainly does not promote sacrifices of any kind as we tend to be against martyrdom and sacrifice in general and do not see these ideas as consistent with a philosophy of living selfishly. We also tend to embrace life and its many lustful pleasures rather than glorifying death as most other religions do.

But if you are interested in performing sacrifices, there is a major world religion, very well represented in most communities in the United States (and most other countries) that performs human sacrifice rituals quite regularly. Some sects of this religion perform this ritual weekly (usually on Sundays), and some even promote performing it daily. Of course they do tend to keep sacrificing the same particular human over and over again (claiming he has divine properties), so it may not be exactly what you're after. It's not the kind of thing we're into as Satanists, but some people like it.

Another good resource on sacrifice is the sacred scriptures of the above mentioned religion, widely available in various English translations. We'd suggest starting at the beginning. This book comes to us from a variety of sources, but it seems to be intended as a manual of devotion to a nomadic tribe's local storm-god, who is prone to violent mood-swings. This collection of scriptures ends with some very disturbing and sadistic predictions about the end of the world and the fate of outsiders. Once again, not really the best guide to life and rituals for a Satanist, but perhaps a good resource for someone else with a taste for cruelty.

If you are interested in practicing real rather than symbolic human sacrifices (we certainly DO NOT recommend this option, but it's your life), there are a few organizations that are dedicated to this, very well represented in every community on earth, and their members tend to be very highly respected. Here are some links to them for people in the United States:

If you just want to stick with animal sacrifices, here are a few links that sound like a good place to start:

We hope you find this helpful. Thanks for the call.

You don't have to call us to talk to Satan. Just look into your heart and follow you desires. To this caller, your number is already possessed through the unholy mystery of caller-ID. Hail SATAN!

http://satanicmission.org/isthissatan.mp3
Posted by Satanic Missionary Society at 9:23 PM No comments:

These are your children on religion

This is what happens when you take your children to church every sunday, and then give them their own telephones:

A note to others that want to leave hateful messages for us: Caller ID exists. Calling a minority religious organization and leaving a message like this is a hate crime.
Posted by Satanic Missionary Society at 12:52 AM No comments:

And now for an uplifting message from an unknown caller

Why aren't there more songs about Satan?

http://satanicmission.org/hailsatansong.mp3
Posted by Satanic Missionary Society at 9:38 PM No comments:

If at first you don't succeed 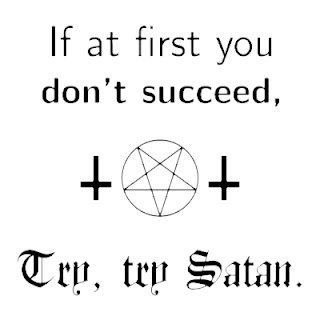 Update: Cafepress.com just emailed us and reinstated the image.  At least they responded.  So you can buy this t-shirt again if you want it.  It's only $11.99 + shipping.  And it's available in your favorite color, as long as it's white.

Cafepress.com just sent us a message that this image violates their policies, though they declined to say which one.  We thought this would make a good T-shirt, so we posted it a few days ago.  It probably got flagged for copyright because one of their under-educated and over-vigilant employees thought it sounded familiar but didn't bother to investigate why.  Here's our reply to their message:

Hello, this image has been incorrectly flagged as violating the content policy. I created all the visual content, and the poem on which the text is based was published in 1840 and has long since passed into the public domain. It is the poem "Try, try again," which can be found in the 1840 teachers manual by T. H. Palmer.

Here is the google books link to the source:

Thomas H. Palmer lived from 1792-1861, meaning that none of his work could possibly remain under copyright in any country.

If this image has been flagged for another reason, please send the details.  Otherwise, please remove the violation flag.  Thank you.

You can view all the images which have been pended by clicking on the following URL (or copying and pasting this URL into your browser):  http://www.cafepress.com/cp/members/login.aspx?goto=/cp/members/imagebasket/image_basket.aspx?f=pending


Thank you for using CafePress!

We recently learned that your CafePress account contains material which may not be in compliance with our policies. Specifically, designing, manufacturing, marketing and/or selling products that may infringe the rights of a third party, including, copyrights (e.g.,an image of a television cartoon character), trademarks (e.g., the logo of a company),"rights in gross" (e.g., the exclusive right of the U.S. Olympic Committee to use the "Olympic Rings"), and rights of privacy and publicity (e.g., a photo of a celebrity) are prohibited. Accordingly, we have set the content that we believe to be questionable to "pending status" which disables said content from being displayed in your shop or purchased. You may review the content set to pending status by logging into your CafePress account and clicking on the "Media Basket" link. The content set to pending status will be highlighted red.

Please note that any current orders associated with pended content are subject to cancellation. Please contact our Customer Support Team at 1-877-809-1659 for more information regarding the status of any orders within the next 24-48 hours.

We apologize for any inconvenience that the removal of your content may have caused you. Please let us know if we can be of further assistance.

Posted by Satanic Missionary Society at 2:02 PM No comments: 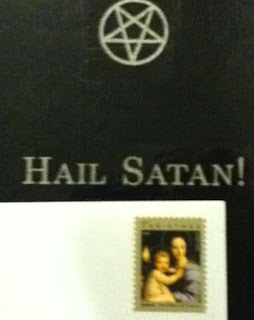 Is it blasphemous to use postage stamps of mary and jesus to order your Satanic membership cards?

We certainly hope so.

When will the postal service issue Satanic postage stamps? Until they do, it's up to us to keep defiling the Christmas stamps they do issue. Merry Antichristmas!

Thanks to the person who sent us this. Your membership cards are on the way!
Posted by Satanic Missionary Society at 3:03 PM No comments: 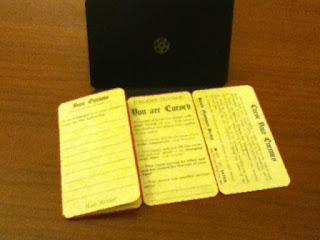 Don't worry, more are on the way. Why are these so much more popular than the membership cards? It seems that given a choice between sharing Satan with up to three friends or cursing up to three enemies, most people choose the latter.

Please call us and tell us how you've used the enemy-cursing kit. We'll be happy to post your testimonials here.

Once again, the number is 512-33-SATAN. You can call or text to it, or you can email us at contact@satanicmission.org.

Posted by Satanic Missionary Society at 5:36 PM No comments:

We made the news a few days ago. Here's the story that ran in the Olympian:

Here's the TV news segment that ran on KOMO TV in Seattle the same evening:

Why are we doing this? Someone needs to. The reader and viewer comments in the above links show just how desperately our society needs the seductive and liberating message of Satan. 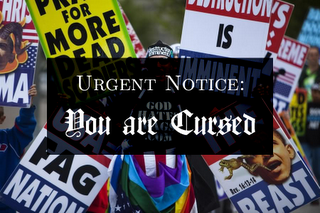 Please join us in praying to Satan for the Westboro Baptist Church and cursing them on their upcoming visit to Seattle and Olympia.

Protestors from the Westboro Baptist Church will be in Washington State at the following times and locations:

We will be at the State Capitol to meet them, and possibly one of the other locations and times (we have to choose only one due to transportation issues). While the hateful Westboro church has no problem harassing high-school students, we think that showing up at a high school with our own religious message is going too far. But we certainly encourage Satanic high-school students to pray to Satan for these people on their own in a visible way.

For background, the Westboro Baptist Church is the group that has disrupted military funerals, claiming that the deaths are god's punishment for our tolerance of decadence and homosexuality. Since everyone else has been praying to their gods for these hateful people to change their ways with no results, maybe a few Satanic curses will help to set at least a few of them on a different path.

Posted by Satanic Missionary Society at 12:16 AM No comments: